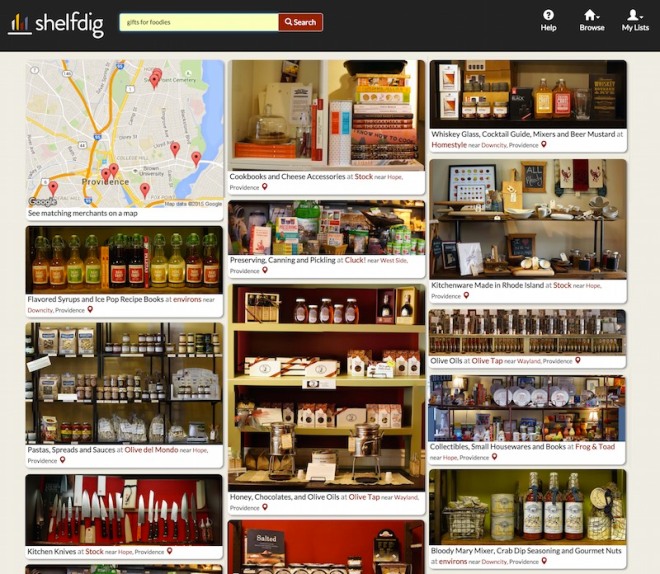 I didn’t want to start another company.

But then it occurred to me. Why is it so easy for me to find things like balloons or coffee mugs or journals online, but I am often clueless where I’d find these items nearby? Wouldn’t it be great if a website could help me shop in my own neighborhood?

You might say I spend too much in front of my computer, and not enough time in person at the stores near me. Apparently, I’m not the only one. Hence, ShelfDig was born.

A group of us came together to create the website at www.shelfdig.com, and we launched it just this month to the public. We currently have partnerships with over 60 stores in Providence from Stock Culinary Goods to Army/Navy to Creatoyvity to Cluck! to Homestyle.

You can do a search on the site, or if you don’t know exactly what you’re looking for, we created gift guides for children’s, babies and pet items, as well as gift guides for cooks & foodies, geeks & techies, sports & recreation, and the ultimate ‘buy local’ guide with locally-made items. You can even browse by neighborhood.

If you’re curious, come stop by our table at the Pawtucket Wintertime Farmers’ Market. Our team members (Geoff, Allan, Frieda, and I) will be there to meet-and-greet, offer demos of the site, answer questions, and hand out swag to all passersby (kids are welcome to pick up stickers too!). We’ll be in the market entrance to the South Hallway from 9 am to 1 pm on Saturdays November 21, December 12, January 9 and February 6. 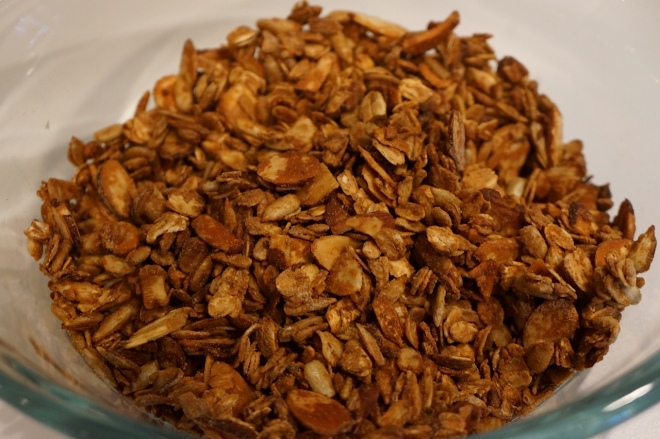 Our version of almond, sunflower seed granola inspired by the one at Blue State Coffee.

I’ve developed an addiction to Blue State Coffee’s house-made granola, but since they only sell it in small cupfuls, I decided it was time to take matters into our own hands.

Last weekend, I bought the ingredients listed on the package and enlisted Geoff to create his own version. We wound up adding two ingredients not listed — a bit of oil to prevent it from sticking together and a small amount of chopped banana chips for sweetness. The results are impressively similar — ours is equally crunchy and has the same nutty flavor. The best part is that we can make it in large batches, so there’s plenty to share. I like it sprinkled on Narragansett Creamery Yogurt or Fage.

I wonder if I can convince Geoff to make our own yogurt next.

We spread the oats, almonds, sunflower seeds and chopped banana chips on a tray to get the balance we wanted first.

Mix those in a bowl, sprinkle in some brown rice flower, a bit of agave nectar (or honey) and a small sprinkle of cinnamon. Mix in a bit of vegetable oil to prevent sticking.

Spread it out on a cookie sheet and bake in the oven at 250 degrees until brown (basically until it matches the color of Blue State’s) or about 45 minutes.

Let it dry on the tray until cool. Then, move to an airtight container to store.

Note: Narragansett Creamery Yogurt can be purchased at the farmers’ markets or at Whole Foods Market. Blue State Coffee has two locations on Thayer Street in Providence — see www.bluestatecoffee.com. 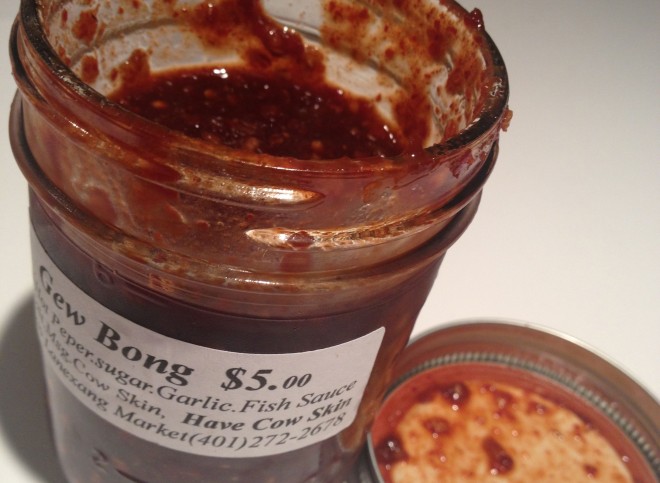 I happened upon this market filled with a nice, neat array of Asian pantry items, largely Southeast Asian as the name implies. They also offer a selection of house-prepared ready-to-eat items, so I left with this house-made Jaew Gong hot sauce. A general condiment, it is typically made with dried water buffalo skin, but as you’ll see on the label this one seems to “have cow skin. Close enough.” 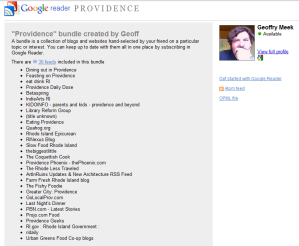 I just talked up my Providence-oriented RSS reading list to someone I just met, and it seemed appropriate to share: here’s my daily Providence reading list. 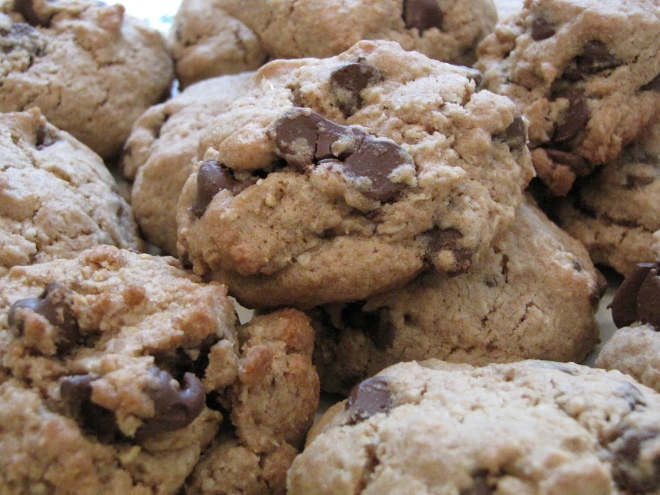 My version of the whole wheat oatmeal chocolate chip cookie.

When you gain 50 pounds during pregnancy and your baby is only six — well, you might be left with a few extra pounds.  Anyway, as you may have noticed, I have a weakness for sweets, which makes dieting a bit difficult (although admittedly I’ve never tried a cookie diet). So in an effort to find a cookie that I could indulge in regularly (no, I won’t divulge what I mean by regularly), I spent a few weeks perfecting this healthier version of a chocolate chip cookie, which I originally found too dry. It turns out, it works better with butter instead of oil (not much surprise there). Plus I borrowed a tip from The Yellow Farmhouse Cookbook‘s cookie recipe, which is not to be alarmed if they look raw. If you cook them too long they will be dry and brittle — and no diet is worth that.

Grind the oats. Mix the oats, flour, baking soda and salt. Set aside.

Cream the butter with the brown and granulated sugars until smooth and creamy (in a mixer ideally, although this can be done by hand). Then add the eggs and vanilla. Mix well. Then add the dry mixture and mix well. By hand, mix in the chocolate chips.

Arrange into balls with about 1 1/2 diameter and bake for 14 minutes at 325 degrees. Remove and cool on a rack immediately.

Note: I find that putting the cookie dough in the fridge only causes it to dry out so I bake them without cooling the dough. Of course, they’re delicious hot out of the oven.  With the remaining cookies, I cool them and keep them in the freezer. If you have a microwave, you can nuke them for a few seconds (no idea how many since I don’t have one). Or just remov from the freezer and wait a few minutes (if you can). 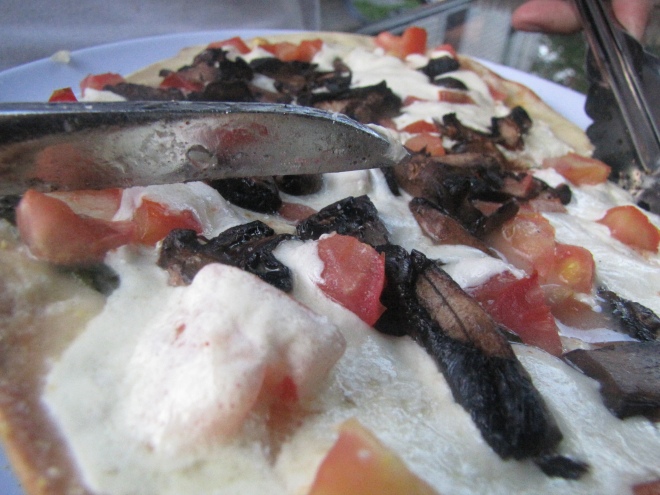 Olga’s Cup + Saucer began in 1988 as a seasonal bakery on a farm in Little Compton.  Over 20 years later, their popular Providence bakery makes delicious homemade breads,  scones, bagels, and other pastries using ‘traditional Artisinal techniques’.  Open for breakfast and lunch, their dishes like french toast, pulled pork sandwiches, and black forest ham pizzas all feature their homemade breads and doughs.   With their seeded bagels (more of a bready texture and covered with sunflower and other seeds) and their blueberry muffins (one covered with almond slices), you really can’t go wrong.

You can also find a selection of Olga’s pastries, breads and pizzas (as well as the ready-made dough) at a variety of farmers markets throughout the summer — Coastal Growers Farmers Market in Saunderstown, RI on Saturdays; East Greenwich Farmers Market on Mondays; and Aquidneck Growers’ Market in Newport, RI on Wednesdays and Portmouth, RI on Saturdays.  Yesterday we made a few pizzas with Olga’s thin pre-rolled dough — Geoff took the dough out of the freezer; added market tomatoes, local basil, fresh mozzarella from Narragansett Creamery, and some grilled mushrooms; and set them directly on the grill for a quick, smoky, and delicious pizza. 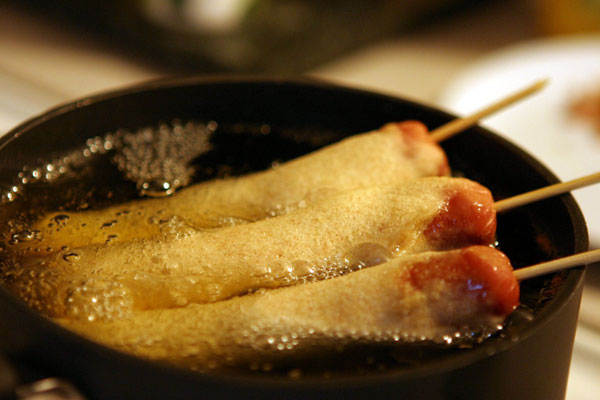 I’d never eaten a corn dog before about a week ago when Geoff made them for us.  Somehow the combination of hot dog and fried cornmeal ‘bun’ creates quite a taste sensation, and Madeline is always glad to eat anything that’s served on a stick.  We decided to make them again tonight — although last time we made them with Oscar Meyer hot dogs, and today we went upscale with Niman Ranch.

Mix together all ingredients.

Heat a pot of of oil. Test the heat of the oil by dipping a drop of the batter into the oil.  If it browns slowly and evenly, it’s ready. Dip each hot dog in the batter and fry until brown.