One of the ‘deals’ Geoff and I made when we moved into our house was that I would take care of all the yard and landscaping duties. Of course, this was a huge mistake on my part.

Fortunately, he hasn’t held me to it.

Rows of perennials in one of the greenhouses at Briden Nursery.

But even with both of us working on it, keeping up a front and backyard is definitely a lot more effort than I had imagined. What did I know? When I grew up in New York City, we didn’t have a yard. I never raked leaves or watered plants or weeded gardens.

After living here a few years, I am learning how to make things easier. First, I decided to convert our front yard entirely to plants instead of grass. It’s too hard to mow our steep front yard, and grass doesn’t grow well anyway. So, seeing what seems to grow abundantly with little to no effort nearby, I decided to plant a field of vinca there. Briden Nursery, as it turns out, has an abundance of perennials, including vinca for $7.50 each (half the price of Home Depot even).

Briden Nursery caters largely to landscapers, so it’s not an in-and-out place, and you might not find the service you would at a smaller nursery. Still, their enormous selection can’t be beat, they take credit cards, and they even have Saturday hours.

The girls usually choose watermelon, although I prefer the ‘real’ frozen lemonade.

There is little argument that Rhode Island has mastered the art of the frozen lemonade: New Yorkers have imported it, and Martha Stewart has copied it.

You usually don’t have to hunt for one of these sweet and sour frozen treats. In addition to physical locations throughout the state, you’ll find either a Del’s Lemonade or New England Frozen Lemonade truck or stand set up near most beaches, farmers’ markets and summer events. They even sell mixes so you can make your own at home (I’ll bet they’re good spiked).

I can’t say I have a preference between the two, although at either I choose the lemonade flavor as opposed to my daughters who always pick watermelon because it’s (sigh) pink.

Jerry and Rose take the bus to Foxwoods Casino when they're in Rhode Island.

My step-mother’s parents, Rose and Jerry (aka Bubbie and Zadie), retired to Florida over 17 years ago. Every year, they return to Rhode Island — the state in which they were born, raised their children, and lived most of their lives.

Of course, they come to visit family, but their journey has also become a pilgrimage to their old favorite restaurants and sights. Their carefully culled picks have nothing to do with hot spots that may rise and fall from the Best of Rhode Island lists. Instead, these are the places that have persisted through the generations and have come to represent a moment in time in Rhode Island.

1. At Twin Oaks in Cranston, they always order the baked stuffed shrimp. They say the shrimp are “scrawny” in Florida compared with the five jumbo shrimps at Twin Oaks. But it’s the stuffing they crave. They also like that when you order a cocktail, like a Black Russian, you get “a drink and a half.” Other favorites here include the house salad dressing and the homemade chocolate pudding.

2. Florida may be the “Sunshine State,” but Rhode Island is still the “Ocean State.” Every year, they plan a beach day at either Narragansett Town Beach or Sand Hill Cove (Roger Wheeler). They love the way the land gradually slopes out to the ocean rather than the abrupt way the land drops at the Hollywood and Fort Lauderdale beaches. (Although they admit the Gulf waters on the west coast of Florida are warm, and the beaches have a more gradual dip.) Still, nothing is better than sitting on the sea wall in Narragansett as the sun is rising or setting. Clam cakes and chowder (which they call chowda) are a must at either Aunt Carrie’s, Champlin’s, or George’s of Galilee.

3. At Crow’s Nest in Warwick, they enjoy the lobster salad sandwiches and their sugar-free blueberry pie.

4. Chello’s by the water in Warwick is a must for the Jim Dandy Burger and the banana berry pie, served only in season.

5. Their trip to Rhode Island is not complete without a Conway Bus day trip to Foxwood Casinos in Connecticut. For 24 dollars a ticket, you get bus service to and from the hotel along with food and gambling vouchers. They give you more in vouchers than the price of the ticket expecting that visitors will wind up spending more gambling. But for Rose and Jerry, it’s a deal.

6. They adore the chocolate walnut ice cream from Brickley’s in Narragansett on route 1A. You can also get Brickley’s in Wickford served in the former Ryan’s market.

7. They love to quench their thirst on a hot beach day with a classic Del’s lemonade. Now with locations in over a dozen states, Del’s started in Cranston. Rose still remembers the owner, Mr. Delucia.

8. They love events like the East Greenwich Main Street stroll; concerts in Wickford and Cranston’s Garden City; and tours in Newport, RI and Mystic, Connecticut.

9. They can’t resist the coffee “cabinets” from Newport Creamery.

10. And no trip is complete without some Walt’s roast beef sandwiches.

Chelo’s on the Waterfront (since 1955)
1 Masthead Drive
Warwick, RI
www.chelos.com

My Pinkberry choice: watermelon yogurt with raspberries, chocolate chips and a waffle cookie.

As I make my way from frozen yogurt to frozen yogurt, I have had one thing on my mind: Pinkberry. Still it took me five days to discover that Rhode Island now has its own Pinkberry at Garden City Center in Cranston. Within 24 hours of this discovery, Madeline, Lucy and I were there in a line full of mostly young females awaiting their sweet fix.

Since they didn’t have my usual flavor, pomegranate, I opted for watermelon. As it turns out, the two taste so similar that I’m not sure I would be able to distinguish between them, which is surprising since I can taste the difference between colors of SweeTarts (just ask Geoff). Lucy mooched mine (how old should babies be to eat frozen yogurt?), while Madeline chose a mini chocolate yogurt with raspberries and waffle cookie. They also offer original, mango, coconut, and salty caramel flavors topped with your choice of fruit, candy and nuts.

Although I usually root for the mom-and-pop over the corporate franchise, I am a sucker for Pinkberry. And seeing how many others apparently feel the same, I predict this to be not the only Pinkberry in Rhode Island, but simply the first.

Bowling for a three-year-old warrants even more enthusiasm than the average adult.

On a recent vacation in France, we made the mistake of promising to take Madeline bowling. After trekking out to the outskirts of Nice, we found the Acropolis only to learn that at age three and shoe size seven, she was much too young and too small to bowl. Somehow that never occurred to us. 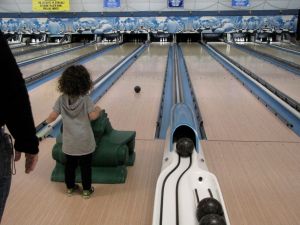 To give the kids an advantage, they have a plastic ramp to roll the ball down the center of the lane.

So when we decided to take her duckpin bowling in Rhode Island, we called ahead to confirm their available shoe sizes, operating hours, and bumpers. Satisfied that this might actually work, we headed out to The Bowling Academy in East Providence, RI for an early Saturday night bowl (after 8pm, it’s Rock N’ Bowl).

Duckpin bowling, for those who don’t know, is a variation of bowling with smaller, lighter balls and shorter, fatter pins.  The Bowling Academy is one of a handful of alleys in the state that offer duckpin bowling (see list below).  The place is nothing fancy, but the lanes are gleaming and the employees spray disinfectant in the shoes after people leave, which I personally appreciate. Of course, for a three-year-old, none of that matters. Rather, the easy-to-handle balls; bumpers to keep them in the lane; and even a plastic ramp to slide a ball down the lane more centrally are the things that make duckpin bowling a surefire kid-pleaser.  So, it wasn’t at all a surprise that the next morning, she was already asking to go back.