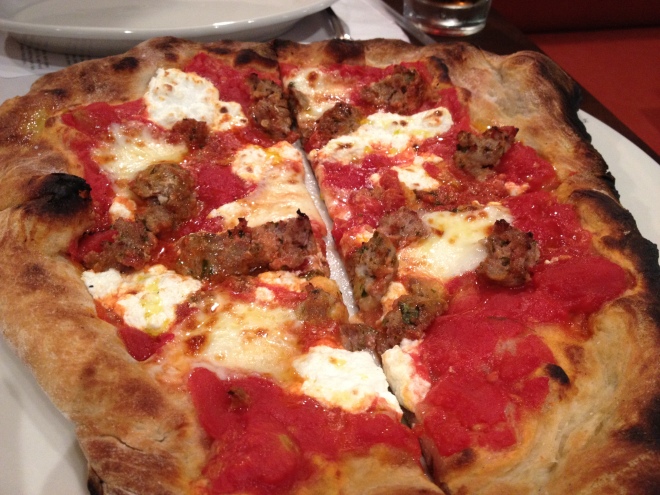 Despite the fact that Providence made it to number three on Travel and Leisure’s Best Pizza in America list, I’ve remained largely disenchanted with my local slice options. For me, all pizza will always be compared to the thin-crusted tomato and fresh mozzarella pie at Mario’s on Arthur Avenue, where my grandmother has been eating for over half a century. As a result, Nice Slice, Fellini, and Caserta Pizzeria have left me unimpressed. Of course, the grilled pizza from Al Forno and Bacaro are well worth the trip, but both of these are more special occasion pizzas (Al Forno doesn’t do take out; and Bacaro makes a more  gourmet pizza). They simply don’t satisfy the urge for the casual, classic New York pizza I grew up on.

So yesterday, when Geoff walked by the new Providence Coal-House Pizza in Downcity, he called me and I came down immediately with the kids to sample it. Their custom ovens heat pizzas to approximately 900°F — much higher than traditional or wood fired ovens — which embed the pizza with a delicious smoky flavor. We tried both the margherita and meatball. My favorite was the meatball — the  combination of melted ricotta and homemade meatballs worked well; Geoff preferred the margherita. Although I typically abandon my crust, I ate it all — which says a lot. No, it’s not Mario’s, but I can honestly say this is now officially my go-to local pizza joint. 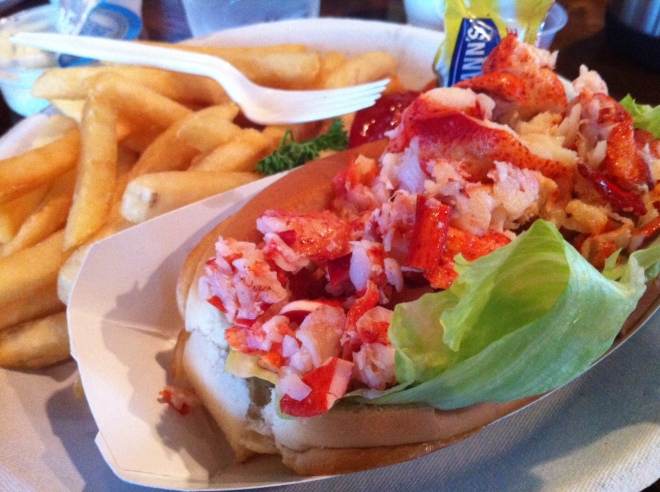 ‘Tis the season for the lobster roll — and I’ve started with my personal favorite from Flo’s Clam Shack in Middletown (across from Newport’s First Beach). It’s no frills — just chunks of plain lobster meat in a hot dog bun with iceberg lettuce. They serve the Hellmann’s on the side, which is perfect for those (like me) who’d rather go without.  And don’t forget to throw in a side of clam cakes — their fried cornmeal balls with clam mixed in.

Of course, this meal makes more sense when following hours of swimming or surfing, but I’ll leave that up to you. 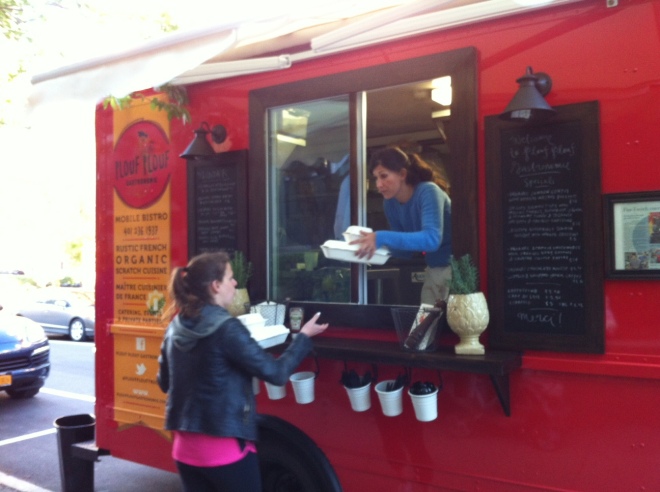 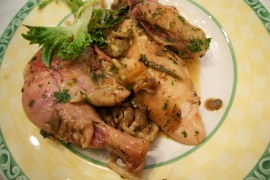 Here in Providence, we’ve come to expect the gourmet hot dog and cupcake from our food trucks, but fine French dining? That I didn’t see coming.

Chef Mario Molliere has worked at a three Michelin starred restaurant, and now he’s here in Rhode Island in his new digs — the Plouf Plouf Gastronomie truck. Dishes range from $5-15, more than most food trucks, but then again, you don’t normally get escargots,  duck confit, and crème brûlée from one.

They’ve been operating only a few weeks, but we’ve already been several times. As it turns out, fine French dining and a screaming, running eighteen-month-old normally don’t mix well — but Plouf Plouf Gastronomie has changed all that. On my last visit, I opted for the goat cheese and beet salad, followed by poulet rôti with mushrooms and a side of pomme frites, and finished off with the chocolate mousse. It doesn’t get much better than this.

I haven’t been down to Bristol yet to taste their homemade morning croissants, but clearly it’s on my list. 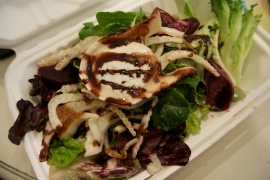