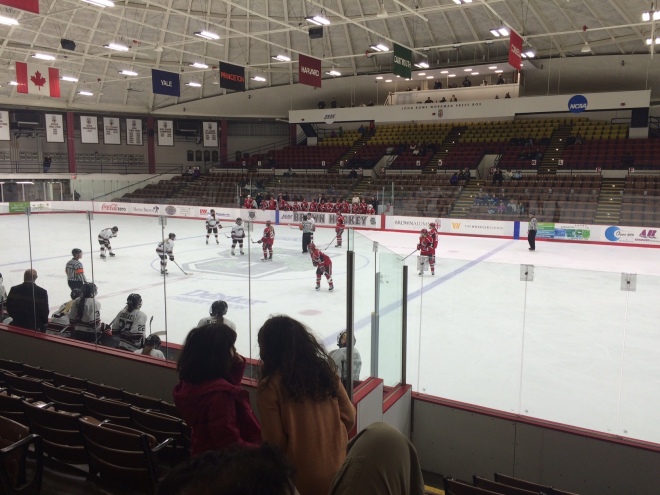 Watching the game, changing seats, and picking their favorite players.

We’re not big sports fans in our house. So the first day my older daughter played Little League, I realized that it might help her to know the rules by actually watching a few games (we then discovered the Paw Sox). Now with our younger daughter playing ice hockey, a friend suggested that we join them for one of the Brown women’s hockey games.

Waiting to give high-fives to the players as they re-enter the rink.

This weekend, we attended our first game. The women’s hockey games at Brown are thinly attended, despite being free to the public. When my older daughter asked if we had bought the seats we were in, our friend joked that we had bought the whole section. But the low attendance makes it easy to change your vantage point, mid-game. And when the team lined up to re-enter the rink, our girls would run to greet them and lean over to give each player a high-five as she entered.

We found the game packed with plenty of action, and the fans in attendance enthusiastic. There’s also a well-stocked snack bar, which came in handy since my younger daughter was hungry even though we had just eaten dinner. The girls even chose their favorite player — Conway because she was ‘so fast’ — although she was briefly displaced by Najjar when she scored.

And as if that wasn’t exciting enough, they even ‘caught’ an errant puck to bring home as a souvenir.

Our own little hockey player.