A photo from the 2012 Jack-O-Lantern Spectacular.

There are only a handful of events that we have made annual traditions since we moved here four years ago, and one of those is the Jack-O-Lantern Spectacular at Roger Williams Zoo. How can you not be impressed with 5,000 intricately carved and painted pumpkins lit from within nestled within the woodsy paths of the zoo?

This year, they’ve upgraded their snacks so now I can eat some Gerbs spicy pumpkin seeds and sip a Union Station pumpkin ale during my walk. And for the kids, there’s still plenty of cotton candy, soft pretzels and hot cider to be found.

The theme this year, Pumpkinville, USA showcases regions of the country–our older daughter’s favorite was a showcase of jack-o-lanterns staged around a Wild West façade that featured a general store, sheriff and county jail. I always love the finalé, which features hundreds of mini jack-o-lanterns strung on every tree and branch with Winx’s Don’t Laugh playing. 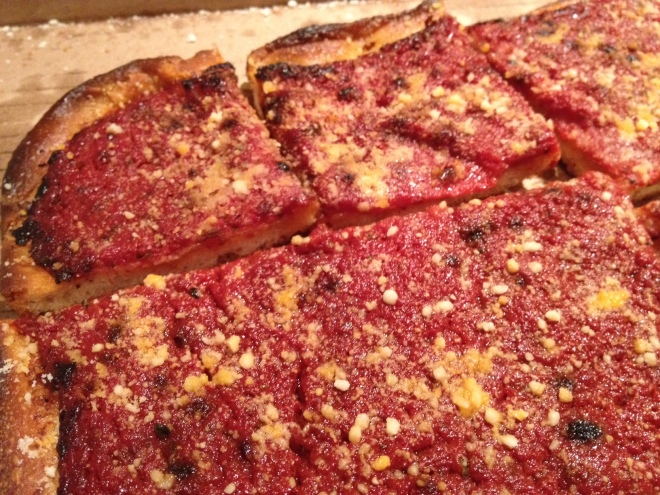 After living in Providence for four years, we still didn’t understand what all the fuss was about ‘pizza strips.’ In our experience, it was a cold doughy cheeseless pizza with globs of tomato sauce that looked like this.

However, recently a veteran of the city introduced Geoff to the ‘bakery style pizza’ at Tomato City Pizza in Providence. And now we get it. Their version of the pizza strip is sprinkled with parmesan cheese and features a thinner, crispier crust cooked so well-done that the brown edges actually taste sweet. It’s delicious hot, warm or cold. I can’t promise this is the most ‘authentic’ pizza strip in Rhode Island, but it’s certainly the best we’ve tasted to date.

In an effort to try and pretend that summer is not over, I’ve continued to make regular trips to Eskimo King for soft serve (yes, it’s worth the drive from Providence). It just doesn’t get much better than their medium (okay sometimes large) coffee soft serve cone with chocolate jimmies. Sadly, they closed for their season on October 14. 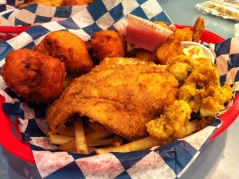 I also finally made my way over to Blount Clam Shack in Providence, which is open year round. We ordered the Saturday special “Seafood Dinner for Two” which as it turned out was plenty for all of us (two adults and two kids) with two cups of chowder, clam cakes,
haddock, scallops, whole belly clams, shrimp, french fries, cole slaw and two drinks. The clam chowder was our favorite with just the right amount of creamy with good hunks of firm potatoes and tender clams, but I definitely prefer the clam cakes at Flo’s Clam Shack. The rest seemed more like your traditional seafood shack fare, although the whole belly clams were quite unique and tasty. Next time, I’ll try the lobster bisque and a lobster roll for a taste of summer decadence in the off-season.

A still from the play Far Away by Caryl Churchill at Gamm Theatre.

At the recent prompting of a friend, we decided to buy season subscriptions to the Sandra-Feinstein Gamm Theatre. Last weekend we attended the first of five shows, and the theatre immediately reminded us of the Lyric Stage in Boston — an intimate space with modest, but cleverly designed sets.

The first show of the season features two short plays by Caryl Churchill, The Number and Far Away. I preferred the first, and Geoff the second, but honestly both presented an eerie story about the decreasing value of humanity and individuality in a post-modern world. Ok, that makes them sound a bit depressing, which was only partially true. They were also funny, and the actors handled the shift between tragedy and comedy seamlessly.

Although this show ends October 13, there are still four more in the season to attend  (and you can get a reduced-price subscription for just those four). The rest of their 29th season includes Good People by David Lindsay-Abaire (November 7-December 8, 2013); The Big Meal by Dan LeFranc (January 9-February 9, 2014); Macbeth by William Shakespeare (March 6-April 13, 2014); Blackbird by David Harrower (May 1-June 1, 2014).

Some of the furniture currently available at House Resale Gallery.

Last weekend, we stopped by the new House Resale Gallery where we met founder and proprietor Kate Keizler who was busy setting up shop. In her store, currently open only on weekend afternoons, you’ll find a great collection of lightly used and restored items–tables, chairs, couches, rugs, cushions, lamps, dishes, art, etc. In our first visit, we bought two Danish modern chairs with red fabric and a red-painted iron lamp–both of which were in her “to be finished pile” but that didn’t stop us. And here’s a revolutionary idea: she’s planning on updating her website with new images of items weekly.