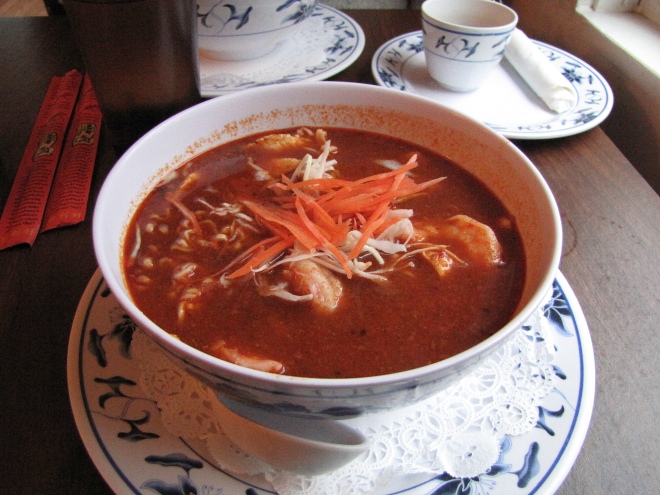 After spending what seemed like an eternity shut in my house with a fever and cold, the only thing to motivate me out of bed was a craving for the Nam Yaa soup at Angkor Restaurant. They deliver, but I find somehow it tastes better there.

According to the menu, my Cambodian Nam Yaa soup contains herbs, lemongrass, ginger, galangal, garlic, and kaffir lime leaves, but all I taste is a perfect balance of sweet, salty and spicy — and that steaming soup (which they call medicine soup) cures me, at least momentarily. They do have other dishes on the menu — chicken satay, hot basil in lemongrass sauce, pineapple fried rice, street noodles with coconut sauce, among others.  But I’ve been here at least half a dozen times, and no matter what I get, I also get the Nam Yaa.

Their new location on Traverse Street (around the corner from their old spot) is tiny, but the waitress told us that the owner will be able to own the building instead of rent, which I was glad to hear since that means they’ll be sticking around.