The Wafels and Dinges truck from New York parked in Providence for the Food Truck Bash.

I only recall two kinds of food trucks from my childhood–the New York quick breakfast truck (for rushed commuters) and the ice cream truck (for us sweet-craving children).Things have certainly changed.

Last weekend, at the Food Truck Bash, nine trucks from Providence, Boston and New York gathered in the ice rink at Kennedy Plaza to present their offerings. There, we tasted empanadas with ground beef, onions, peppers, scallion, potatoes and olives in a white dough from New York’s Nuchas; a Portuguese thin pork sandwich from Providence’s Portu-Galo; and a dark hot chocolate and several liège wafels (chewy Belgian waffles that need no toppings, in my opinion) from New York’s Wafels & Dinges.

Liège wafel from Wafels and dinges.

During our last trip to Belgium, we searched everywhere for a waffle as good as the one you can apparently get from a New York food truck. They even have Spekuloos ice cream, which I’ll be getting next time Wafels and Dinges comes to me or I go to them. 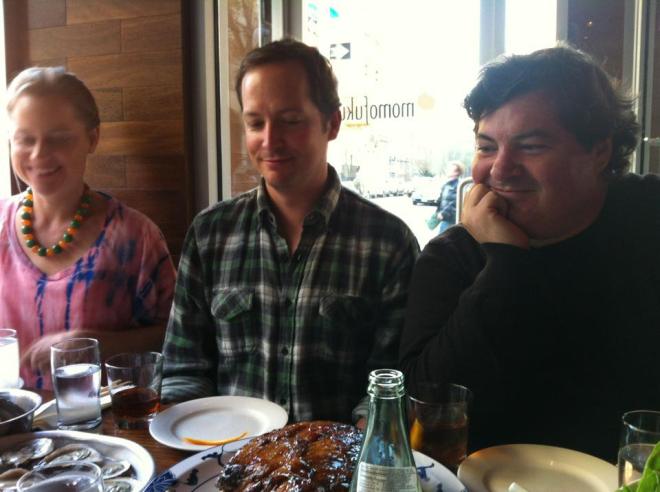 It was a busy weekend, but here’s the gastronomic sequence:

12. Joe’s. Slice of pizza, eaten outside in Father Demo Square.

Espresso, in order of preference:

This post was originally on Michele’s blog Where in the World:
Traveling and living adventures before and after children.

In a short stint in New York City, I packed in a bunch of movies at the Tribeca Film Festival, several trips to Pinkberry, a Magnolia cupcake, and a Saturday evening performance of South Pacific starring Paulo Szot and Laura Osnes — all of which I highly recommend.

Having done both, I’d say living in NYC is much more enjoyable than visiting it.  In either case, there’s nothing like a great Broadway show, and South Pacific didn’t disappoint.  The sets and lighting truly transported me to a slow sunset on an island much prettier than Manhattan.  The performances were stellar and the vaguely familiar songs quite catchy.  I bought the soundtrack the next day and have been playing it on repeat ever since.  Yes, I am a sucker for the theatre.  I’d like to go back every night.  Do you think there are people who spend $300,000/year going to Broadway shows?  If so, how might I become one of them?

But the thing I noticed about New York was how stressed and hurried strangers seemed.  I’m not sure if I just never noticed it before.  In fact, I’m not sure I wasn’t like that myself before.  I actually saw a woman argue over who was first for a bathroom stall when there wasn’t even a line.  This is a person who is spending too much time crowded in subways, waiting in lines and making sure no one’s getting the better of her.  Oh and trust me, if you’re not paying attention, they will get the better of you.  I realized this when my cab driver decided to drive from Lincoln Center to the Village by way of Times Square on Saturday night, making a 15-minute ride take 45 (and a $8 cab ride cost $16).  And yet we still tipped him.  I might as well be a hick.  But this is how you become a “New Yorker”: spend your day getting cut off, shoved and swindled and pretty soon you’re getting in a cab haughtily instructing the driver which route to take.

Don’t get me wrong, New York is a truly wonderful place — one of the best cities in the world.  For years, I had one of those “I Love New York” bumper stickers on my car.  But I think now I’d need one that says, “I Have Mixed Feelings about New York.”