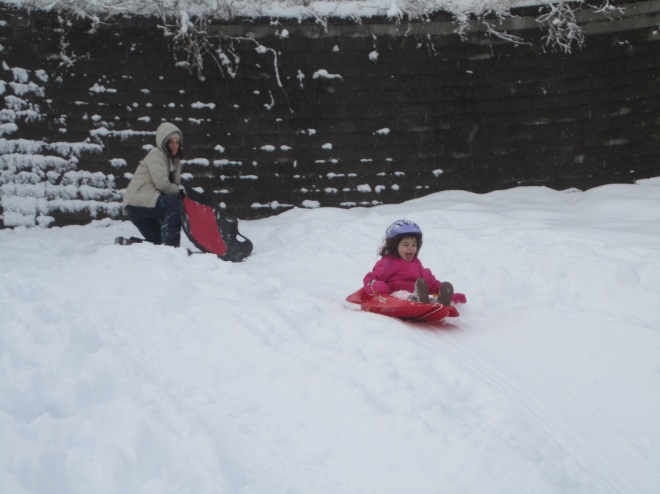 Madeline on one of the novice hills

Although I grew up in New York City, our building in Riverdale happened to be perched atop a hill making sledding at least feasible, if a bit dangerous (your ride ended with a tree or in the road). But it’s hard to imagine a more perfect sledding spot than the one at Moses Brown School. With over a foot of snow in the Providence area today, we joined dozens of kids and adults with an array of brightly colored sleds and tubes who arrived there for sled rides down a variety of hills – some short, subtle ones for beginners and two steep ones for the more adventurous. All of them end in a nice flat field of snow making it fairly safe, except for the occasional collision (like the one when Madeline crashed into me as I stood in her riding path to take an action shot).

The hills at Moses Brown make a great sledding spot.

For our first time out, we stuck to the novice hills and gave the two sleds we bought yesterday at Benny’s a couple of good runs. I’m just glad that I bought two sleds, so when Madeline wanted to go by herself, there was still another sled for me.

Oh, and if you were out there, we were the (only) ones carrying an infant bundled in a car seat. 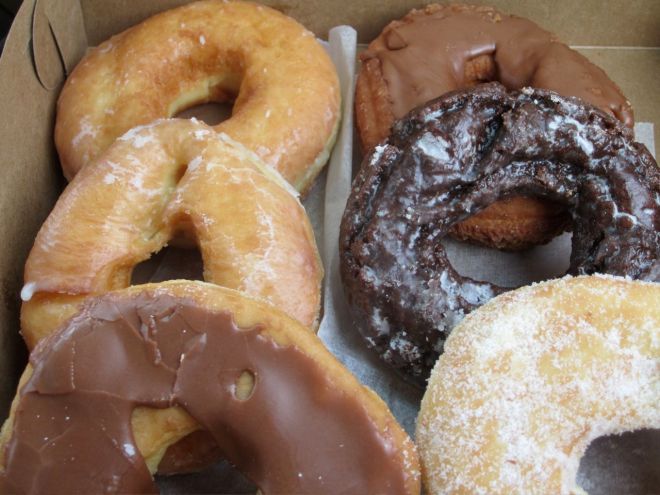 An assortment of old fashioned and raised doughnuts from Allie's Donuts.

You’d think in the doughnut capital of the United States, there would be a plethora of great options a short drive, or better yet, a short walk from my house. But a Google Maps search shows only two local options – Honey Dew Donuts and Dunkin’ Donuts – fine if you’re desperate, but lousy if you’re looking for a fresh homemade doughnut.

If you’re willing to travel for your doughnuts however (which I am), then there is a great option – Allie’s Donuts in North Kingston which has been around since 1968.

Inside, they offer doughnuts in two categories – old fashioned and raised – each in assorted flavors such as sugar coated, chocolate frosted, glazed, jelly-filled, and chocolate. The old fashioned are usually the type of doughnuts I find too dry, but Allie’s are crunchy on the outside and soft and moist inside. The raised are soft inside and out so that they practically melt in your mouth. We tried several different kinds – all delicious, although personally I prefer a darker chocolate frosting (the chocolate donut, on the other hand, was right on).  They even make “donut cakes” for birthdays and other lucky occasions – something I’ve never heard of before, but will be sure to be trying at the next opportunity.

There’s no doubt how fresh Allie’s doughnuts are since they sell bags of day-old ones at discounted prices. But for me, the fresher, the better so next time instead of arriving at noon on a Saturday, I’d like to be there at 6 am when they open.