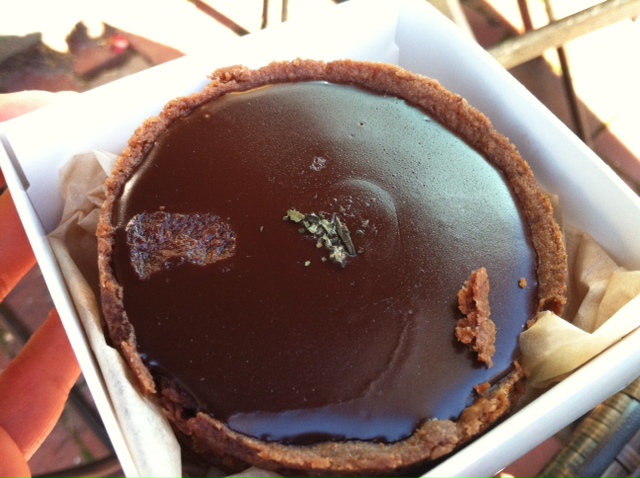 It can’t quite rival the chocolate tarte at Bread & Roses in Paris. Of course, this one’s just a few towns away and pretty delicious too, so I guess I won’t complain…

Honestly, it’s about time that Newport had a charming little tea and chocolate shop, and on Bellevue Avenue no less. Last weekend, we stopped in to Maison de Coco and despite the fact that it was 80 degrees, I ordered a tea-infused dark chocolat chaud (hot chocolate) and a chocolate tarte. The chocolat chaud was perfection — not as thick as Burdick’s, but with an equally rich flavor.

The inside of La Maison de Coco.

Although the shop has a petit café where you can enjoy your treats, Geoff and I had to take turns since the kids were asleep in the car (more chocolate for us). On his trip, he selected a handful of chocolate truffles, also tea-infused and also delicious.

Between the beaches and surfing, Flo’s and Frosty Freez, I didn’t really need another reason to go to Newport. But now I have one.

Write what you know. Use who you’ve got. A still from our new short Bubble Gum Ice Cream screening this week as part of the 48 Hour Film Project Providence.

You might think it’s insane to sign up to write, direct and edit a film in 48 hours when you’ve got a five-year-old and a one-year-old. We did too, but we did it anyway. The result is the short film Bubble Gum Ice Cream, which will screen this week in Lincoln, RI along with dozens of other films also made in and around Providence, RI this past weekend.

The 48 Hour Film Project began in 2001 and now (in 2012) will inspire thousands of filmmakers to produce nearly 4,000 films in 120 cities on 6 continents. This happens to be our third time participating in the project — the first time was in 2004 in New York City (that film has been forever archived), the second time in Boston in 2008 (which you can watch online), and now here in Providence in 2012. I wonder where we’ll be producing our next film in 2016?

Bubble Gum Ice Cream screens with Group B on Tuesday night at 9:30pm.