This post was originally on Michele’s blog Where in the World:  Traveling and living adventures before and after children.

When I had first pictured Hawaii in my mind, I had imagined something along the lines of Blue Lagoon. Although Waikiki does give you the feeling that it’s been crafted by Hollywood or Disney with its smooth stone sidewalks and carefully spaced palm trees – it doesn’t quite match my mind’s pre-conception. I had pictured the beach as a serene, romantic place, when in fact it’s no less crowded than New York’s Jones Beach on a hot summer day. I suppose the contents of 60,000 hotel rooms spilled out onto the beach mid-day would be anything but peaceful. But despite the throngs of honeymooners and Japanese tourists, Waikiki has its redeeming qualities. It’s rare to discover a beach with fine soft sand and clear blue-green water where you can take a baby out swimming safely in relatively calm waters as well as take surfing lessons a few feet away. And I love the fact that they let everyone bring floats and boogie boards into the water (boats even wash up on shore).

We’ve spent most of the past few days at Waikiki Beach, although we did decide to rent a car yesterday to explore the rest of the island. With surging mountains, roaring surf and too many beaches to count, Oahu offers quite a scenic drive. Yet after being turned away from one beach after another (too rough surf at one, a Portuguese man-of-war warning at another), I think we’ll stick to Waikiki for the final four days of our trip. That said, I did enjoy watching the surfers at the Bonzai Pipeline even though the waves only hit 5 feet or so today (versus the winter peak of 20 feet) and got in a quick swim in giant waves at Waimea Bay. 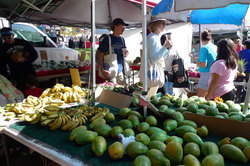 Our other excursion out of Waikiki was Saturday when we woke ourselves up early at 9 am (jet lag has allowed us to eat late and sleep in) for the weekly Farmers’ Market at the Kapiolani Community College on Diamond Head Road. We were glad not to have missed it since we found not only tasty breakfast (hot beignets, homemade spicy ginger ales and the most buttery cranberry scones), but also some local fruit to take back to our room – mangosteens, mangos, rambutans, apple bananas (which taste like pre-ripened bananas).

For the most part, food in Oahu has been good, although you definitely have to seek out reviews from a reliable source. The guidebook we brought Oahu Revealed offers wonderfully detailed descriptions of beaches, attractions and hotels, but I’ve found it doesn’t quite match our sensibility with food. It’s hard to take any book seriously that gives an ‘ono’ (meaning ‘delicious’) rating to McDonald’s, and I’ve found some of their recommendations off the mark. For example, Maui Tacos proved a definite disappointment with bland burritos (maybe it’s just too far from Mexico here to get that right). And some of their exclusions are unfortunate, like the great sandwiches at Ruffage Foods (I had tuna avocado and Geoff had a veggie burger avocado).

The restaurants are often geared toward tourists, which often make them a disappointment. And Waikiki obviously is a serious tourist destination. Any town with a Tiffany’s as large as the one here means business. And surf shops – well, take your pick. There are actually two Billabong stores across the street from each other. And there appears to be a Haagen-Daz every few blocks in case you’re feeling a tad faint (which I usually am). But by far, the most ubiquitous chain here is a regional shop called ABC Stores which carries everything you might need in a pinch – suntan lotion, allergy medication, milk, and sarongs – as well as plenty of souvenirs like pins, cups, t-shirts, flower barrettes, and kona coffee. The abundance of these stores seems almost absurd – on a short walk, we counted eight of them – but they certainly do offer comfort. Everything you need is there should you need it. And I suppose that is part of why Waikiki has become what it is today.

There are many families here on vacation, and I can see why. Although it feels so much like a remote tropical destination, Hawaii is just another state in the U.S. This provides comfort on many levels – there’s no problem getting money, speaking the language, driving a car, etc. In addition, the beach seems to please kids universally. Mirabelle sings “going to the beach” every morning and adores playing in the sand, swimming in the ocean, and wearing as few clothes as possible. The poor thing – she certainly doesn’t realize that in a few days, we’ll be back to bundling her in umpteen layers before leaving the house, only to proceed as quickly as possible from one indoor location to another.