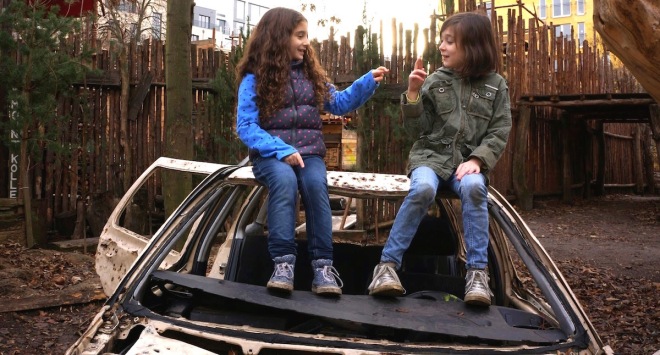 A still from the film Imagine Kolle 37, shot in Providence, RI and Berlin.

I always thought Providence had pretty cool playgrounds. But then we spent four months in Berlin, where we lived across the street from an “adventure playground” called Kolle 37. And then I realized, Providence could be a lot cooler.

For those who are unfamiliar, adventure playgrounds are areas for children to play with fire, hammers, saws, and other tools. Parents are not permitted. Rather, play workers monitor the area to maintain safety, while allowing children the freedom to enjoy what some call ‘risky play.’

Fortunately, there is already a movement in Providence to try to bring an adventure playground to the city.

This Thursday October 22 at 6:30 pm at the Providence Children’s Museum, there will be a screening of the short documentary The Land as well as a screening of the trailer of my film Imagine Kolle 37, followed by a conversation with The Land filmmaker Erin Davis, Providence PlayCorps Director Janice O’Donnell, and myself. I hope you’ll join us…

2 thoughts on “In Search of an Adventure Playground”