The new Radish truck on their first day on Thayer Street. 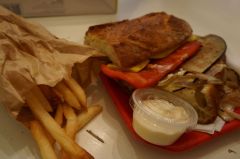 Roasted vegetable sandwich, homemade garlic aioli and a side of fries.

We had decided to get some dinner at Plouf Plouf, but they weren’t parked in their usual spot on Thayer that night. Not to worry, a new truck had appeared — Radish. It seems they perhaps overheard my complaint about the lack of great sandwiches in the area. Of course, I do love the down-to-earth offerings at Geoff’s Superlative Sandwiches on Benefit Street — their generous tuna sandwich and bucket of pickles come the closest to a New York deli that I’ve found in Providence. However, in contrast, Radish has arrived to offer a more gourmet variety of sandwiches, soups and other dishes inspired by local farms and their ingredients. The sandwich we tried featured layered roasted zucchini, red peppers and caramelized onions with a side of garlic aioli on ciabatta bread. Pair that with some fresh thick-cut french fries, and you’ve got quite a meal in your hands.

One thought on “Radish: The New Truck on the Block”