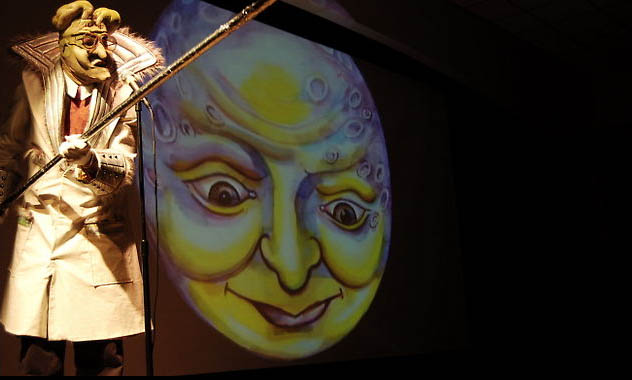 A performance of Big Nazo.

I love that Providence has its own nonconformist version of First Night. Unlike First Night, Bright Night is not alcohol free but it maintains the mission of kicking off the New Year as an arts celebration incorporating theater, music, arts and films. This year marked its seventh year with events at over a dozen venues in Providence, along with a mini-WaterFire lighting.

We decided to see a live show by Big Nazo, an international performance group that happens to reside here in Providence and makes large-as-life (and larger) puppets, masks and other creatures. The 6:30 pm event at Lupo’s attracted quite a number of families with kids ranging from a few-months-old and up, yet it was a thin enough crowd that everyone easily could enjoy an unobstructed view. The performance itself was, well, weird, a kind of bizarre ride through a wonderfully twisted imagination. Picture a giant horse that removes his mask to become an enormous old white man to remove his mask to become a small-headed dog to remove his mask to become a gloved hand to then reveal his true identity as a mad scientist and your MC for the evening. And that was only the opening. Not surprisingly, Madeline was perfectly riveted and never budged from the front row seat she secured for herself. And she’s been talking about it ever since.

Pass by the windows of Big Nazo on Eddy Street in Providence to see a sample of the weird characters that comprise Big Nazo.

One thought on “Big Nazo at Bright Night”