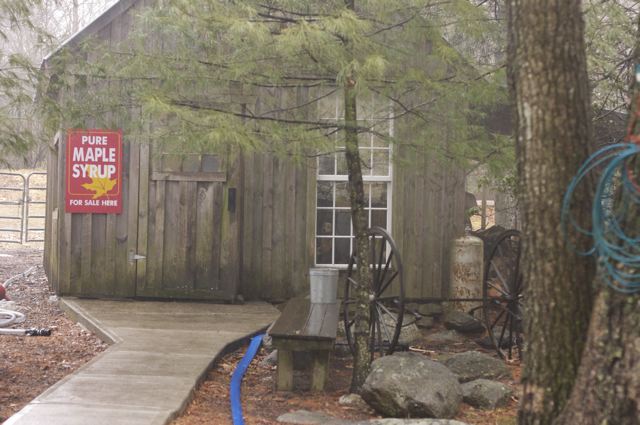 The "Sugar House" at Chepachet Farms.

It didn’t start off well — it was raining, and we were late.  It got even worse when we arrived at the Audubon Society in Bristol only to realize that we had misread — the maple sugaring tour took place at the Parker Woodland Wildlife Refuge in Coventry, which was on the other side of the state.  Luckily Rhode Island isn’t that big, and luckily, the Audubon Society made space for us on the tour later in the morning.

We arrived at their house tucked in the woods to a breakfast spread of Dunkin’ Donuts muffins and doughnuts slathered with their homemade maple glaze and some pancakes to taste their maple syrup.  Then we followed our tour guide outside in the rain to learn about the Native American’s discovery of maple syrup and its rise to the sweet necessity we now know and love.   The program also demystified how to discern a sugar maple tree (forked branches, twin buds, color and shape of the leaves) and how to tap trees and produce your own syrup. 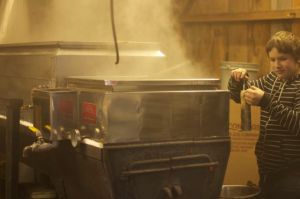 Inside the "Sugar House" at Chepachet Farms, the tree sap boils down into maple syrup.

Our tour ended back inside where we could taste test the real thing against Aunt Jemima’s.  As a pancake connoisseur, this happens to be one of my areas of expertise — the phony stuff has a stickier, stringier consistency and, in fact, has little maple flavor.  Also inside, Chepachet Farms had setup a stand for visitors to sample and purchase their homemade goods — a sweet maple salad dressing, a crunchy maple peanut brittle, maple-flavored popcorn, and, of course, maple syrup.  Learning a bit about the Chepachet Farms operation, we decided to drive there immediately.  After a bit of hunting around in the rain, we came across their “Sugar House” which is open to the public for a view of the sap boiling furiously in a wood-burning metal tub at a temperature of over 200 degrees.  In their farm operation, they gather up to 500 gallons of sap daily which they boil down to 12 gallons of maple syrup.  If you come during the season, you can literally buy syrup that’s been bottled that morning and is still warm, but if you can’t make it out, you can also order their syrup online.

See a list of Rhode Island farms that produce maple syrup at Farm Fresh RI. Or, go ahead, try this at home.  Here’s a handy guide on How to Tap Maple Trees and Make Maple Syrup.

Chepachet Farms
Their “Sugar House” is open to the public — call ahead for times.
226 Tourtellot Hill Road
Chepachet, RI 02814
www.chepachetfarms.com