June 2014: Farmstead has been sold and will no longer be run by Chef Matt Jennings 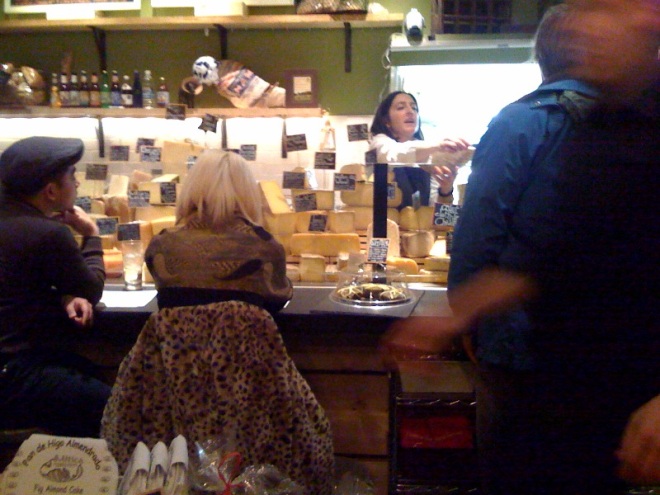 Although there’s an official restaurant next door, diners are even happy to sit at the “cheese bar” for a meal at Farmstead.

I love any restaurant where the waitress asks, “Do you want the bacon with that?” and she’s talking about dessert. But what’s most impressive is that at Farmstead the bacon actually works in the dessert.  Especially since, as everyone knows, bacon is a health food.

I first discovered Farmstead’s gourmet store where they make superb sandwiches with local ingredients and sell an impressive array of cheeses, in-house cured meats and New England gourmet goods.  This array of items provides the backdrop for Farmstead which is usually enough to get me salivating.

It’s quite popular especially on weekends, but worth waiting for (even if it did take way more than the 45 minutes the hostess promised on one Saturday night visit). During the week or if you come early, though, you might just slide quickly into one of their precious few tables and enjoy expertly subtle flavors packed into a range of dishes that would satisfy both gourmands (seared vermont chicken livers) and more timid foodies (virginia ham & brie cheese sandwich). It may be hard to resist their meat and cheese boards, but it’s easy to fill up on those so my advice is to order a selection of the little plates to share as well as one larger plate and save the meats and cheeses to take home with you. Of course, I don’t follow that advice. But maybe you can.

It’s clear that Chefs Matt Jennings and Kate Jennings and their team have a passion for well-crafted fresh food made with locally-sourced ingredients, and the results are indisputable.  Next weekend, Chef Matt and his team will return to defend his last year’s win of the Cochon 555 competition, which you can attend this Sunday, March 28 in Boston.  Let’s hope as he says, Farmstead and Providence can keep “bragging rights” after the competition which sets five chefs (the other four are from Boston) against each other in the competition.  Providence may not beat Boston in many ways, but it’d sure be nice to continue to claim “Prince of Porc.” [Ed. note: Jennings did, in fact, win that year’s Cochon 555].