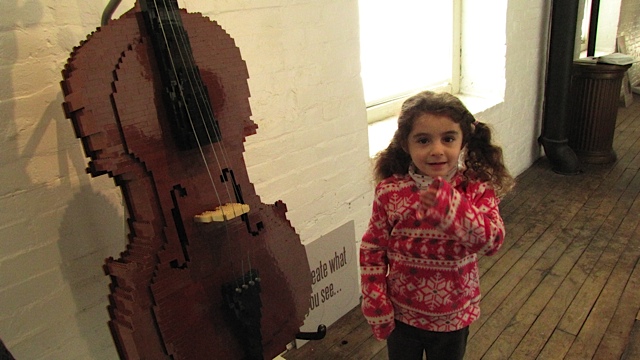 Madeline found a cello made of legos at the Narrows Gallery exhibit.

When Lucy started to crawl, I moved Madeline’s ten pounds of legos out of the girls’ room and into the living room. I feared that the tiny brightly colored pieces would make too tempting a snack for an infant.

The Narrows Gallery's exhibit "The Art of the Brick" is open through November 19, 2011.

But Madeline seldom went to the living room to play with them. What was once her favorite activity was no longer part of her daily play.

So I decided, it was time to bring back the legos.

Yesterday, we drove to Fall River where the Narrows Gallery is currently hosting a free art exhibit of work by New York artist Nathan Sawaya. The pieces, entirely made of legos, don’t match the intricacy of the displays at Lego World (in Germany we saw a lego stadium with 30,000 lego people fans), but they were inventive — a giant pencil writing the word yes, a yellow man with an open chest pouring out legos (which Madeline said looked like a jack-o-lantern), and a full size cello. 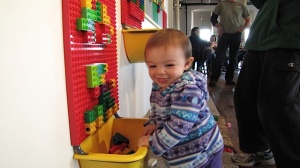 Lego walls down the hall give children the opportunity to build their own lego art.

Of course, it’s hard enough to prevent kids from touching art when it’s not made of legos, so wisely the center set up an accompanying build-your-own exhibit down the hall with logo walls so low even Lucy could try her hand at building.

The exhibit inspired Madeline to build her own at home too — so far she’s made her own lego family, a sewing machine, and a robot. Legos are now strewn all over the kitchen and our bedroom floor. Lucy loves running her hands through the giant bucket of legos. As expected, I have caught her eating one a few times, but so far she hasn’t swallowed any. At least, I don’t think she has.

2 thoughts on “The Art of the Brick: A Lego Art Exhibit”