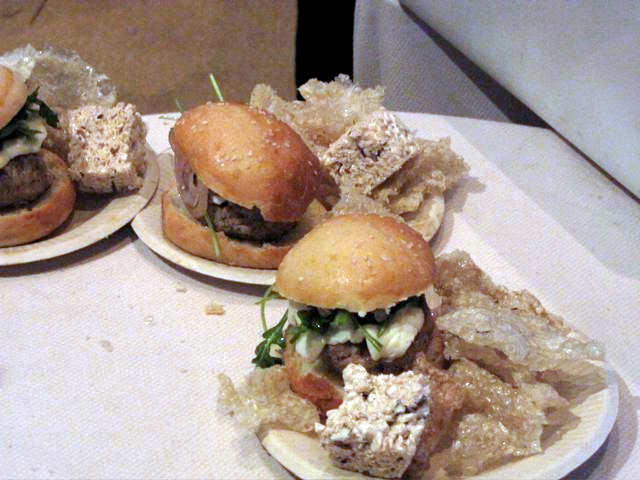 Providence Chef Matt Jennings takes home the prize from the Boston Cochon 555 for his Pig Mac.

On paper, Cochon 555 sounds like a divine night — five talented chefs create five pork dishes each while five vineyards provide a selection of accompanying wines. In reality, it felt a bit more like a mess hall as hoards of people in a tight space competed for a sliver of a table to set their plates while they stood and ate their food — that is, after they’d waited in line for fifteen minutes to get that mini-plate of food. 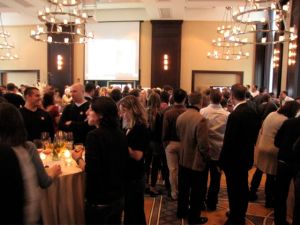 Why do I have the funny feeling that most of these people's tickets were comped?

Of course, the food is the star attraction here. Geoff thought that the cured porks and homemade hams were top-notch — my particular favorite was the pork jerky from Clink. Pulled pork sandwiches and a pork consommé were tasty but nothing new; more impressive was Toro’s pork skin chili (delicious despite how it sounds). Some of the dishes seemed rushed in the face of demanding crowds — Clink’s steamed pork dumplings needed a bit more steam and Craigie on Main’s pork skin wrap was slopped together making for too fatty of a bite. Ultimately Providence Chef Matt Jennings took home the prize for his perfectly conceived Pig Mac with a side of salt and vinegar fried pork skins and a pork rice crispy treat (also delicious despite how it sounds).

I did find the voting method quite odd for an event of this stature. Rather than one ballot per person, they use the “honor system” leaving piles of cards by the ballot box. That may work in Massachusetts, folks, but here in Rhode Island, corruption is a pastime. Nevertheless, I voted for Matt’s Pig Mac (once) and so did Geoff, and it wasn’t only because we wanted Rhode Island to win, but because it was actually the best. And because he kept it simple, he was able to keep up with the demand and prevent long lines at his table.

So here’s to our very own Prince of Porc for his well-deserved second year reign.