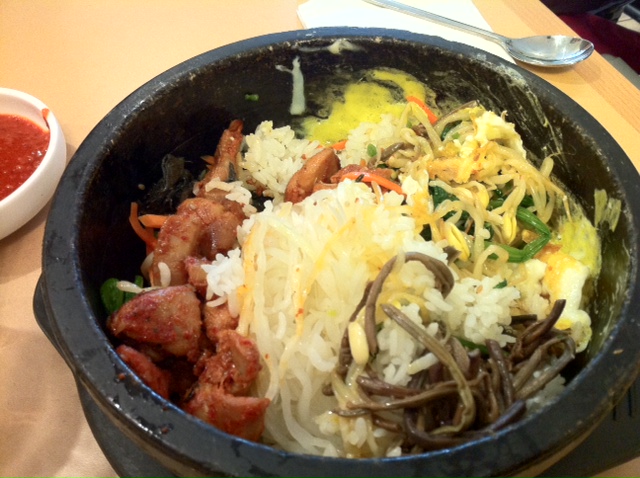 Over the past two years, we’ve been impressed with some of the Korean food in the Providence area, including Sun and Moon in East Providence and, of course, Mama Kim’s Korean BBQ food truck, which serves up some tasty pork sandwiches. So when we learned that the owners of Juniper had opened Soban, a Korean eatery, on Thayer Street — we were among the first patrons on opening night.

It’s hard to judge a restaurant on its first night — they wound up with a full house and dozens of take-out orders so they were obviously a bit overwhelmed. So I’ll forgive them any service mishaps for now.

We ordered the steamed pork and chive dumplings, made with thin, fresh dough and a well-composed filling. For the main dish, I ordered the Bibimbap — a classic Korean dish served in a hot stone pot with meat, vegetables, and rice topped with a cracked egg which cooks as you mix it together (along with spicy chili paste to your liking). Geoff ordered the spicy tofu stew made with soft, fresh tofu that melts in your mouth simmered with shrimps with the heads still on in a spicy chili broth. I skipped the shrimp, but tasted the tofu. Soft, fresh tofu is a rare find and nothing like the rubbery cubes you find in more commercial miso soup.

For Madeline, we had ordered Duboki, chewy strips of rice (imagine grains of rice larger than your fingers) in a sweet and hot chili sauce with onions, carrots and fish cake. It was delicious as well, although by the time it finally arrived, Madeline was fast asleep in the stroller. Fortunately, it makes a great breakfast the next day as well.