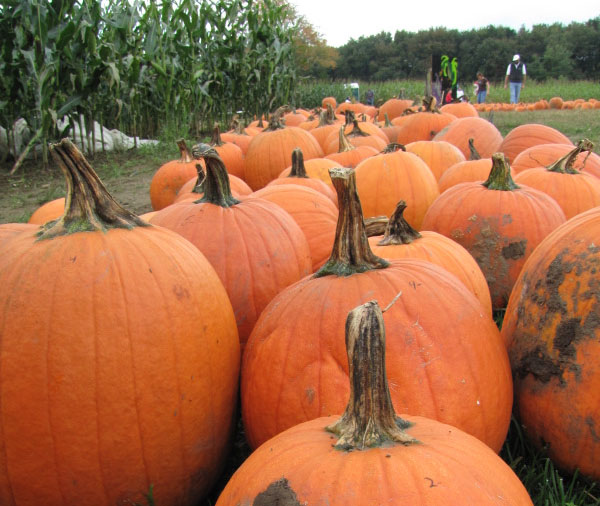 Pumpkins of all shapes and sizes.

Over the weekend, we spent a day with our family at Schartner Farms in Exeter, RI.  The farm stand alone is an impressive sight– in autumn, they sell over a dozen crops grown on their 85 acres — beets, apples, peppers, carrots, broccoli, squash, tomatoes, string beans, potatoes and of course, pumpkins.  They also offer fruits, vegetables and flowers from other farms so you can pick up staples like lemons when you need them. From their on-site bakery wafts the smell of their pumpkin, apple, and berry pies which are obviously quite popular judging by the volume they churned out last Sunday. 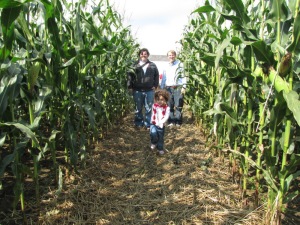 Heading into the corn maze on Schartner Farms.

The family fun begins with a hay ride which winds you deeper into the farm along dirt roads.  It drops you off at the ‘pumpkin patch’ where you find an assortment of activities for the kids.  Madeline enjoyed the waist-high mini-maze, but gave up quickly on the the larger corn maze which I continued on alone.  Their maze is based on a quiz  — this year’s theme was insects so the questions centered on the peculiarities of mosquitos, dragonflies, cockroaches and more.  For example, how long can a cockroach survive without it’s head?  The right answer leads you to the correct path.  Let’s just say it took me a little while to get out of there — I apparently don’t know much about insects.

They also have a number of photo ops in addition to their pumpkin patch like their enormous funky scarecrows, Halloween-themed pictures to poke your head through and some larger-than-life cartoonish bugs.  You’ll also find a handful of carnival-like games (guess the number, ball toss).

After you’re done, you take the slightly bumpier hay ride back to the farm entrance and by then you’re certainly ready for a snack (or at least we were).  No need to leave, you can get hot dogs, their custom soft drinks and tasty french fries made on the spot with their own fresh farm potatoes.  For dessert, pick up a slice of one of their pies (we preferred the crispy apple pie to the pumpkin).

On your way out, you can pick up a pumpkin (if you hadn’t already at the pumpkin patch).  At their stand, they have all shapes and sizes — tiny ironsides to ones large enough to need two hands and your full attention to carry.  They even have a collection of decorated and painted pumpkins which come with names like “Grumpy Dave” and “Scary Mary.”